My husband, Jack was traveling the day my sister-in-law, Semmelle, and I excitedly walked into my OB’s office for my 36 week appointment. She had never been to an ultra sound before, and I was so excited to show her a sneak peak of her new nephew. I met her at my mother’s that afternoon, where relatives were still visiting after throwing me a beautiful baby shower the weekend before. My cousins and I had stayed up until late the previous night, unpacking gifts, laundering tiny clothes, and decorating the nursery while we ate chocolate cake and giggled like little girls. Caleb was the first grandchild for both Jack’s and my families. After years of fighting an extreme case of bipolar disorder and wondering if I would ever be well enough to bear my own children, we felt the world was celebrating with us as we prepared to welcome our victory child.

At first, they couldn’t find the heartbeat in the exam room. I became furious with the nurse, assuming she was inept. They brought in another nurse, and she, too, could not find the heartbeat. My OBGYN was called in. We were rushed to the ultrasound room as my OBGYN shouted orders to her receptionist to call her nanny and tell her she’d be late. I didn’t realize that anything could be that wrong until I heard the ultrasound tech gasp.
“What?!” I screamed.
“THERE’S NO HEARTBEAT.”

As I write this, years later, I still cry. I remember begging them to do an emergency c-section, kicking and screaming like a three year-old and my sister’s face covered in agony. I remember leaving with my dead baby still inside me, Semmelle driving me back to my parents’ home. I remember calling my husband’s family, knowing that Jack was somewhere in an airplane, still believing that our baby would be born and live, and knowing that I would have to be the one to tell him we were living a horror I had never even thought to imagine.

Shock makes some people crazy. Shock makes me sane, and I am able to see what is necessary and what is not. I am able to function and choose. I am able to get on the phone with my husband, while he is sitting on the airplane, and tell him his first son will be born dead. I am able to do that because he needs to stay on that plane and come home to me. I laid in my parents’ bed and waited as well-meaning, shocked relatives came in one at a time to tell me they loved me and rub my belly as they had done so many times throughout my pregnancy. I laid in bed and prayed the Our Father and the Hail Mary over and over, because they were the only prayers that I could muster. I asked my mother if she thought I was unlucky. If I was cursed. I prayed Jack home to me, praying that he, too, would not be taken from me.

Jack’s father greeted him at the airport and drove him to my parents’ home. He burst up the stairs to hold me in his arms, and we didn’t care who watched. We wept. We wretched. We held each other all night, knowing that would be the last night we spent alone with Caleb, the child we already loved so much. We gathered up every ounce of courage we had, and we made our way to the hospital. We had just toured the birthing center in our labor and delivery class, so we knew right where to go. Our bag had already been packed, just in case Caleb had decided to come early.

For me, before having children, labor and delivery seemed like a black hole that I would enter, having no idea how I would make my way out the other side. I was afraid of the pain, afraid of the risks involved, afraid that I might die. I had never considered that my child who had been checked and rechecked thoroughly throughout my pregnancy and was certified healthy, could die. And I never dreamed what it could be like to face all of the fears of my first childbirth, knowing that I would have to endure it all only to leave the hospital without my child.

It was a day. An entire, 24-hour-long day. I was heavily drugged, as I had requested, with an epidural that left me entirely numb and very groggy. I spent the day with loved ones hovering over me when I opened my eyes, and kneeling next to Mary at the foot of Jesus’ cross every time I closed my eyes. In both realities, I was in extreme pain, but with my eyes closed I was in the company of Jesus’ Mother. As He suffered, she suffered, and they both held me in my suffering. That day, as I lay in that hospital bed, I felt the most intense love being poured out upon me, into me by pure mother love. In her suffering, she begat love for me, born of physical and spiritual travail. It entered my laboring heart and flooded my chest cavity. This love rested upon me for weeks, as I bore the physical pains of just giving birth without the joy of my baby to help me forget them.

Caleb Joshua was born at 6:27 pm on Wednesday, March 19th, in the middle of Holy Week. Time stretched in front of me like never before. There would be too many tomorrows without him, so now was the only time to not fall asleep with exhaustion or miss one small dimple. Now was the time to make up for a lifetime of loves and hugs, kisses, baths, and songs. Those few hours would be the only ones I would ever spend with my son’s physical form, and I knew that it would most likely be a very long time until we would again be face to face.

He was baptized by our beloved Father Ed and Deacon Bill. I bathed him, undaunted by his already decomposing form, and dressed him in his going home outfit. We took many pictures, but not enough. We held him, our parents held him, and we held him again. Time stood for me. And then, I looked at Caleb’s eyes and they were crying blood. We knew it was time and I handed him to the nurse.

They wheeled me out that night only because I refused to stay the night in a hospital without my baby. I howled from my room to the car, where Jack laid in the back seat next to me until I passed out from exhaustion. I woke up early the next morning in the guest bedroom at my parents’ house. I woke up without Caleb and started to wretch again. My sobs woke Jack up, and the two of us laid in bed and cried ourselves back to sleep.

We did everything we could for our son in the days following his silent birth. I went to the funeral home and picked out his casket, his burial plot. I went to the children’s boutique and bought him his final outfit. When the sales lady asked if it was a going home outfit, I doubled over in sobs. My mother then went ahead of me into every store we entered and told them what was going on and to please leave me alone. I bought myself a hot pink dress to wear to his funeral, and his father a bright orange tie. It was Easter week and we refused to wear black.

The Tuesday after Easter, surrounded by loved ones all dressed in their best Easter clothes, we laid Caleb to rest. Our siblings, his aunts and uncles, carried his casket down the middle aisle of our church while Jack and I walked hand-in-hand behind them. We celebrated his life, as well as the unending life he was already living in heaven.

We have spent the time since Caleb’s death trying to move on. We have had two more beautiful sons and live as joyfully as we are able. But the love for our firstborn son never fades, and my yearning for him has created a deep hole in my heart that is only satiated by my relationship with Jesus. Certainly, the shock and the intense pain have subsided. What is left is an ache, deep and unyielding, gnawing in the background of a beautiful life. I still hang his stocking at Christmas, and his birth certificate will forever be displayed in our hallway upstairs with the tiny prints of his perfect feet. We celebrate his birthday every year by going on a “Caleb adventure,” with his brothers. We look forward to heaven more than ever before, but know our little Lebanite Warrior is in Good Hands, exploring the Promised Land, until we meet again. 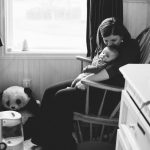 Taylor is from Seattle, Washington and mother to Caleb (stillborn 2008), Abraham (5), and Samuel (2), and happily married to her husband, Jack, of 14 years. She tackles mental illness, surviving stillbirth, and caring for her heart warrior, Samuel, in her weekly blogs at www.redvinespirituality.com.