I can remember being eight years old and wrapping up our eight pound puppy in a blanket and carrying her around. I would put her in a stroller and push her around the house, which my brothers made fun of me for doing. I always loved children, babies being my favorite, and wanted some day to have my own.

We lived next door to a family who had four kids and I spent lots of time with them. I was ten at the time and their oldest was four. I played house with them and always pretended to be their mom. They were the first kids that I ever got a chance to babysit. From the ages of 12-17, I babysat children in my church, and also worked every Sunday with children’s church, taking care of kids 4-12 years old. I continued to volunteer there until I was 21, when I decided that I needed a break.

At 17, I got a job at Ross Dress for Less, but I still knew that was not what I wanted to do with my life. I wanted to be a preschool teacher. During my senior year of high school, we were asked what we wanted to do with our lives and what it would take to get there. I wanted to teach preschool and found out that I would need to work in a daycare for one year before I would qualify. So, right out of high school, that is what I did. After working at the daycare, for a year I finally began teaching preschool at our church’s school, five days a week, at the age of 21. I will never forget that first year of teaching some parents thought I was too young to be a teacher. But by the end of the year they sure changed their mind.

I met the love of my life, John, online, when I was 24 years old, and he moved from Florida to Oregon for me. We were married on June 10, 2006 and as soon as we got home from our honeymoon, John went to the hospital. He had lymphedema in his legs, where the blood flows down but not back up to his heart. His legs swelled so badly he could barely walk and he had terrible black lines running up and down them.

John and I talked about having a family and children of our own, but his health was too unpredictable. He would get better and then it would worsen again, so until he was well enough to have kids of our own, we made room in our home and lives for other children. We invited my niece and nephew to stay with us as much as they could and my best friends’ kids also came over to “Auntie’s” to be spoiled.

On January 1, 2010, my niece was spending the night and we were watching television in John and my room when I heard John yell from the other room. I ran to him and found him sitting in a chair, clutching his chest. I asked him if I should call 911 and he fell face forward and was immediately gone.

I grieved the loss of John and moved back in with my parents right away. I just couldn’t stand being in that apartment alone the way the firemen had left it. After John passed I returned to apartment only long enough to get my clothes and a few things that were ours. Some of the stuff my parents and his parents kept but almost everything else was donated to Freedom House.

Even though I missed John, I still wanted to have kids of my own and knew that that if I was to marry again, I would need to eventually start dating. I also feared that if I stayed in my parent’s home I would end up in an eternal state of depression. Not that I didn’t love living with my parents; they were my rock as I was grieving the loss of my husband and to this day I don’t know what I would do without them. But, still, I knew I needed to get out and start my life over again with someone new.

I got onto internet dating sites and began looking. I met several guys that didn’t work out and was beginning to feel hopeless when I finally said, “Okay, God, I am done searching! If you have a man for me, then you will have to put him in front of me.” Literally right after I had resolved this, Don texted me and said that we needed to meet. He had three children, which scared me a little bit at first. I didn’t want to be an evil stepmom.

Don and I talked on and off for a few months and I told myself that he would be the last one. And he was! After dating almost a year, I grew to love his kids and Don and I began talking about marriage. I asked him to speak with the kids first to get their blessing on our engagement. Not only did they give us their approval, but all three were in the wedding! We married in 2011 and his oldest son, 16, served as our best man, the middle son, 14, as a groomsman and his daughter, 12, was one of my bridesmaids.

It has been three years since I joined their family. I feel like I was able to win my step children’s hearts when first getting to know them by spoiling them and allowing Don to play the disciplinarian. We would go grocery shopping and when they asked for Oreos, he would say no, and I would step in the middle and say, “Aww, c’mon, please???” This way, they saw me on their side, but I also wasn’t undermining his authority. I also think that communication is a big key to any marriage and even more so when you are a split family. I learned to be consistent  from the start and never back down; when I said yes to something, it stayed yes, and when I said no it was no. The bible even says that, “let your yes be yes and your no be no,” James 5:12.

In the years since Don and I were married, his children still love me and he and I began to try having a baby of our own.

In July 2016 we went to a week-long church camp meeting where I got a blister between my toes. I had neuropathy in my feet so I couldn’t feel it, but my husband kept an eye on it. We didn’t have health insurance at the time so I kept putting off a visit to the doctor, but when it didn’t improve after a month, we figured it was time to go. I was referred to a wound specialist who then sent me to an orthopedic surgeon. An x-ray showed I had no bone left in one of my little toes, and the surgeon recommended immediate amputation. Around the same time I noticed the toe next to the one the doctor was going to amputate was a little purple. It was discovered I had a flesh-eating bacteria and may need to lose that toe as well if it didn’t heal on it’s own.

After the first amputation, my other toe got worse and had to be removed the following day. While recovering in the hospital I received insulin to get my blood sugar under control. The wound doctor suggested six weeks of Hyperbarics and no walking during that period of time. I couldn’t go home because I needed a wheelchair. We didn’t know what to do until a sweet, older couple from our church offered to let us stay with them until I was able to walk again.

It was six long weeks of driving over 40 miles five days a week to Hyperbarics. I felt like I was never going to come home! But we had so much love and support from our family, church family, our jobs, and friends! Don had to take the six weeks off from work to drive me to and from the treatment, but the cards, prayers, and financial support we got during that time was astounding. God is our provider! Finally on October 6th, 2016 they said I was done with Hyperbarics and I could start walking on my foot again. I was so happy to be home and in my own bed again.

About six weeks later I noticed I hadn’t menstruated and I was very regular! We had been trying for five years to get pregnant with no results so I didn’t think I was pregnant. When I told Don, he suggested we take a pregnancy test…what could it hurt? I went to the store and got a 2-pack pregnancy test and took one. It said I was pregnant! I couldn’t believe it; I had to take the second one because I thought maybe the first was wrong, but the second one said the same thing!

We now attend a church in Portland where our now two-year-old girl is attached to the pastor and his family. He spoils her so much, saying it’s because he has four boys and always wanted a girl, but I think it’s because she loves him so much. She wants to follow him everywhere he goes and he lets her!! I don’t know what we would do without our family, church family, and friends. It really does take a village to raise a child and we are so blessed to have a village to help us.

‘For this child I prayed, and the Lord has granted me my petition that I made to him. Therefore I have lent him to the Lord. As long as he lives, he is lent to the Lord.’ And he worshiped the Lord there.
1 Samuel 1:27-28 ESV

Toni lives in Scappoose, Oregon with her husband, Don, and their daughter. Her stepchildren are all in their 20s now and live in various places. She and Don try to see them as much as possible. Toni and Don are very involved with our new church. Don is head of the men’s ministry group and Toni is the head deaconess. 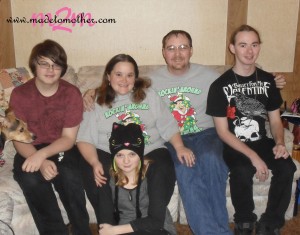