We’ve all heard the horror stories of teens and young adults traveling abroad. The headlines of Natalee Holloway and Amanda Knox, and Hollywood thrillers like Taken have scared us into thinking that what happened to those girls could happen to our children as well. While these awful events and the many other less publicized stories of youth injured, killed or arrested on trips should not cause us to fear traveling with our children or sending them off with adventure groups, they should give us pause to examine the safety of these trips and the qualifications of the hands we leave them in.

In remembrance of the loss of Tyler Madoff on July 4, 2012, and in effort to support the #MakeSafeTravelHappen campaign, I’d like to share a letter from the Madoff family about the tragic loss of their 15 year old son…

My son Tyler Madoff died while on a Bold Earth teen tour in Hawaii during the summer of 2012. Andrew Mork, Bold Earth’s tour guide leader, and Nolan Reed, an employee of Hawaii Pack and Paddle (a subcontractor of Bold Earth) took 12 teenagers, including my son, to the edge of a cliff off the Kealakekua Bay, in the Captain Cook Memorial State Park. There they climbed into active, churning tide pools and were struck by forceful waves. Two of the boys, Matthew Alzate and my son, were swept out to sea. Matthew was rescued and revived, but my son was never found.

The group was hiking off permit through the state park to the Pahoehoe Lava Flats, facing the ocean at the Napo’opo’o Lighthouse when they ventured without permission into these lava flat tide pools. Their license to operate tours was subsequently revoked by the local authorities.  There were high surf warnings in effect, resulting in other tour companies pulling their groups at lunch time due to the unsafe conditions. The Bold Earth tour guides had no safety gear with them when they entered into the tide pools with the 12 teenagers; no ropes, no flares, no life jackets, no cell phones! A fisherman witnessing the commotion called 911 minutes after our son was swept out to sea, while Mork and Reed had no way to call for help.

The surviving and obviously traumatized teenagers were not allowed to call their parents for hours; Abbott Wallis, owner of Bold Earth, was concerned that the tour would disband if the kids expressed that they wanted to go home. Much worse, Wallis waited 5 hours after my son was swept into the sea to call my wife and me to inform us that our son was missing and likely dead. We subsequently learned that he had made several calls to his attorneys,  a public relations firm, and to the owner of Hawaii Pack and Paddle, Barry Mims, to “get on the same page with this” so as to avoid legal responsibility. Obviously, the first few hours of a search are the most crucial, but because he delayed calling us, we did not have the opportunity to hire local help to search for Tyler until the next morning.

The morning after my son’s disappearance Wallis instructed Mork to continue the tour, taking the remaining teenagers ninety minutes up the coast the next day. No one from his company was in Kona to greet us or show us to the bay where our son died. When the tour moved on Mork simply left Tyler’s backpack with a local fisherman at the bay. A kind social worker met us and took us to the site and to the fire house to meet with the Coast Guard and Fire Department search and rescue personnel.

Am I an angry, grieving and broken father who is resentful towards the Bold Earth and Hawaii Pack & Paddle personnel? Yes I am. But I am mostly writing this note in the hope that other families will not have to suffer as we do every day.

The Madoff family reached a wrongful death settlement against Bold Earth Teen Adventure Tours and Hawaii Pack & Paddle in February, 2014, nearly two years after losing Tyler. In addition, they have launched an effort to educate other families on the risks of teen travel and encourage them to take every precaution to #MakeSafeTravelHappen. Michael and Marianne Madoff also hope that Tyler’s story will serve as an example for other tour companies to take better precautions and enforce safety programs so that no families need to suffer as the Madoffs have. They also plan to set up a fund to raise awareness and support search and rescue efforts in Hawaii.

Here are a few tips to keep your kids safe when traveling, either with your family or on a group tour: 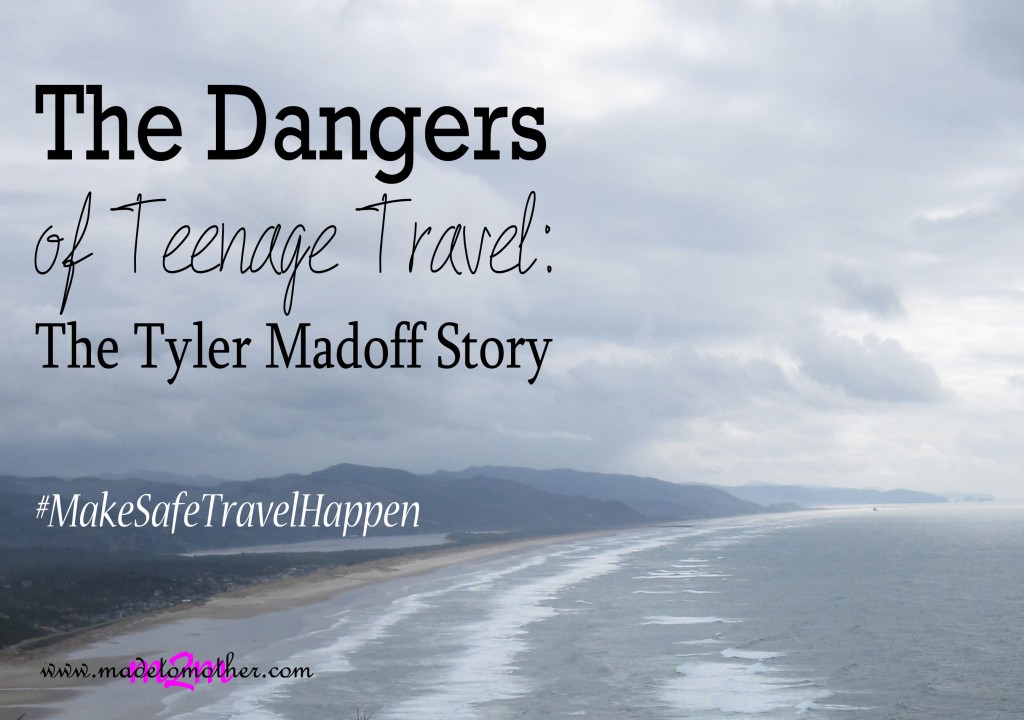